I am not sure what it is that makes Harry Potter and the Goblet of Fire my favorite in the series…the hubster would joke and say it is because of Robert Pattinson, but I am not that crazy about vampires.

I think I adore it so much because Goblet of Fire is the first movie to introduce the true darkness of Lord Voldemort and take the Harry Potter series from tween to young adult.

Okay, so the clip of the day is at the end of the movie when Harry and Lord Voldemort are facing off in the graveyard. Their wands are connected and well…just watch… 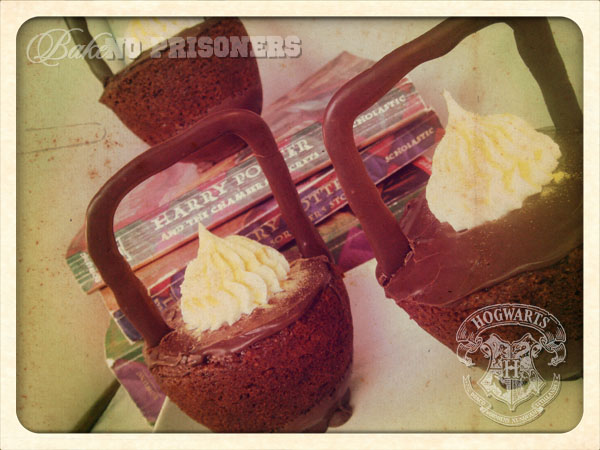 Cauldron Cakes are actually the wizarding term for big fluffy pancakes, but they typically look like this all over the baking blogosphere. Harry sees them for the first time on the witch’s trolly on board the Hogwarts Express in Harry Potter and the Sorcerer’s Stone. 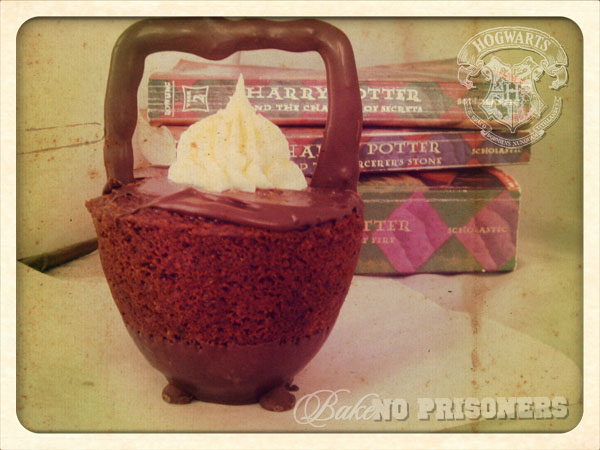 To make the cakes: preheat the oven to 350 degrees. Spray pan with cooking spray that contains flour.. In a large bowl, combine flour, cocoa, baking powder, baking soda, and salt; set aside. In another large bowl or the bowl of a standing mixer, combine the oil and sugar. Add the egg and vanilla and beat until thoroughly combined. Sprinkle 1/3 of the flour mixture over the ingredients in the bowl and beat until just combined. Add have the milk and stir until combined, then scrape the bowl. Sprinkle another 1/3 of the flour into the bowl, and again mix until just combined before adding the remaining milk. Beat until just mixed, then add the remaining flour and beat the mixture until thoroughly combined, scraping the bowl, as needed. Stir in the chocolate chips. Fill each cup a little more than 1/2 full. Bake the muffins for 18-20 minutes, or until a toothpick inserted in the center comes out clean of cake batter. Allow to cool completely before decorating.

In a medium bowl, beat together the marshmallow fluff, butter, sugar, and vanilla extract until light and fluffy, about 3-5 minutes.

To assemble:
Using a cupcake corer or sharp knife, cut out a cavity in the bottom of the cupcake. When using a knife, I run it in a circular motion around the cupcake, while always pointing the knife towards the center (this will make the cavity cone shaped).

Fill a pastry bag with marshmallow filling and pipe into the cavity of the cupcakes. Garnish the top with edible gold glitter or shimmer.

To make cauldron handle, melt the remaining chocolate chips, stir until smooth, and place into a pastry bag. You don’t need a special tip for this step; I simply cut off the very end of the pastry bag which was sufficient. On a non-stick mat or wax paper, pipe out the handles (feel free to use any pattern you’d like). I recommend measuring the cupcakes with a ruler to determine how wide you need to make the handles before piping. Let the chocolate set until hardened, approximately 30 minutes, before very carefully peeling off of the non-stick surface and placing into the top of each cupcake. 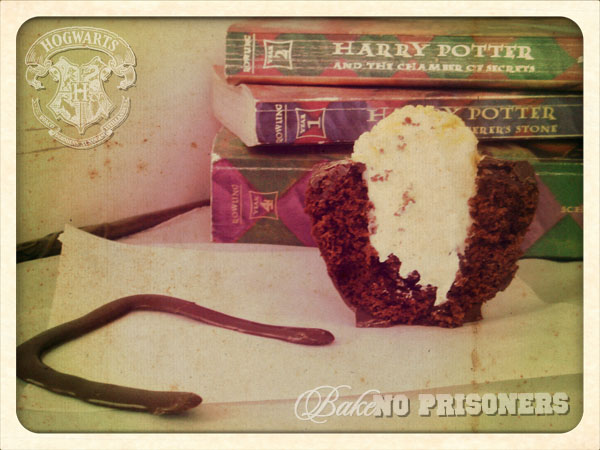 “I’m going to kill you, Harry Potter. I’m going to destroy you. After tonight, no one will ever again question my power. After tonight if they speak of you, they’ll only speak of how you begged for death. And how I being a merciful Lord… obliged. ” ~Voldemort (Hey, they can’t all be warm and fuzzy!)