The latest Doctor has been around for awhile, but I always like to revisit the episode where the Doctor meets Amelia Pond for the first time. He has just regenerated and that makes him very, very hungry! The problem is, he has no idea what he likes to eat. So he has Amelia search through her cupboards. She offers him yogurt, beans, bread and butter, bacon; none of which he is even remotely fond of. He finally settles himself on fish fingers and custard. Ew! Gross. I know. Luckily, when I thought about recreating this unusual dish, I decided to make a fish finger look-alike.  Instead of actually fish fingers, I made tea-infused shortbread.

The tea infusion itself is actually very simple. Whenever you are baking with tea, steep approximately 1 1/2 teaspoons of loose leaf tea per tablespoon of butter. It is also a good idea to use unsalted butter, so as not to alter the flavor of the tea. 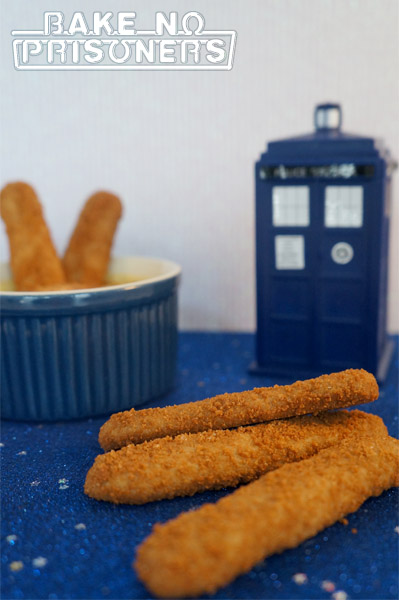 I used crumbled Biscoff cookies for the “breading” of my fish sticks. Just pulse 10-15 cookies in your food processor and then roll your “fish sticks” until coated.

Tonight marks the Season premiere of Doctor Who 7.5. We have a tradition in our house that before every new episode, we make homemade popcorn. It kind of makes us feel like we are at the movie theatre. This season, I thought I would step it up a notch with my Geronimo Popcorn Mix. Geronimo is the Doctor’s favorite catch phrase. Every Doctor has one or two. 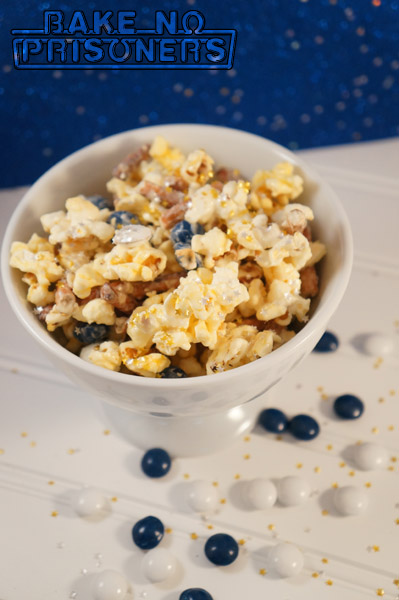 I love the sweet and salty in this snack. York Peppermint patties have always been one of my favorite candies, but these minis, along with the gold and silver stars make it cool. 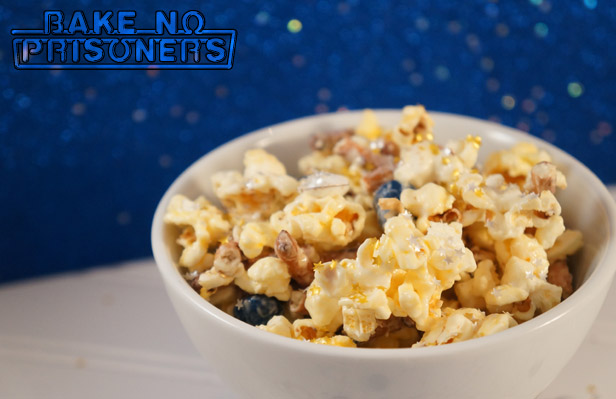 The Doctor would never go anywhere without his sonic screwdriver, so I thought I would make it into a drink for tonight. 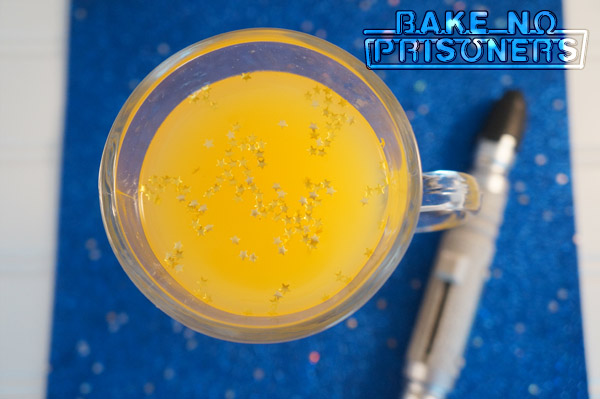 I am in love with my Soda Stream and it came in handy for this drink perfect for any Doctor. The mango energy drink gives the ordinary screwdriver, a sonic kick. 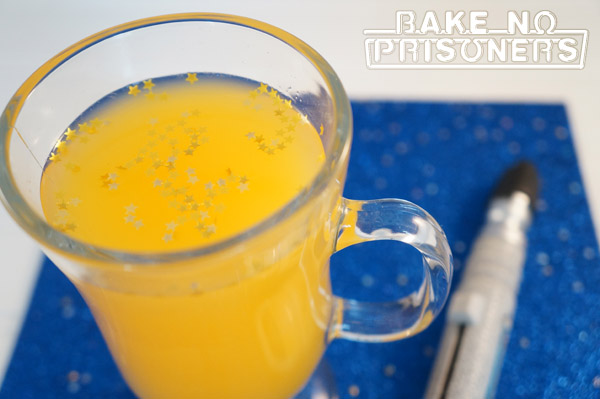 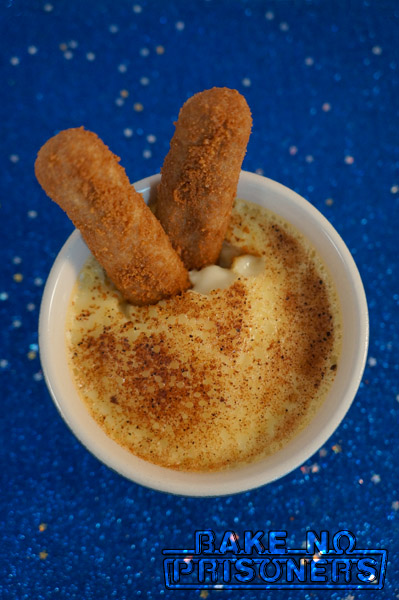 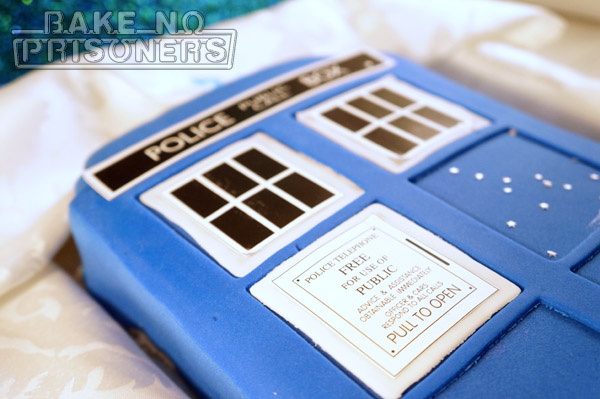 It is no secret that I am obsessed with Doctor Who. In fact, I have been waiting for the TARDIS (Time And Relative Dimension In Space) to show up in my backyard for some time now. The way I see it, the Hubster and I could just pull a “Rory and Amy” and fly off into space and time with the Doctor any day now…

Mr. BNP and I are fairly new to the Who scene, considering it is celebrating its 50th anniversary this year. We jumped on the Whovian train a few years back and I have since caught up by watching the reruns on Netflix. By far, my favorite Doctor is David Tennant. He was the Tenth Doctor and coincidentally, played Barty Crouch Jr. in Harry Potter and the Goblet of Fire (my favorite HP movie.)

There are currently Eleven Doctors total, with the marvelous Matt Smith playing the current Doctor. Why so many Doctors? Well…it’s a bit of a long story, but  to avoid  any confusion to all my non-Whovian readers, I will try and make it short. There really is only one Doctor. He is the last time lord from the planet Gallifrey.  The Doctor is around 900 years old and every time he “dies”, he actually regenerates into someone “new”. New face. New look. New likes. New dislikes. New tastes, even. But inside it is the same old wonderful Doctor. Get it?

The Doctor travels in a big, blue police box called the TARDIS. It is bigger on the inside and is able to travel through space and time.  He typically has a companion or two with him. That’s what I am not-so-patiently waiting for…

Once they step out of the TARDIS, the Doctor and his companions are always faced with a new dilemma that could change the course of history as we know it. He is often seen battling Daleks, Cybermen, Weeping Angels, or any other alien life force with his sonic screwdriver in order to save the world. In short…BEST. SHOW. EVER.

March 30th marks the mid-season premiere of Doctor Who 7.5!!!

There are not many Whovians in my little town (I know a total of 5), so I thought, why not have a virtual party to celebrate? There has got to be a TON of you out there in cyber world!

So to kick off our Who party, I made you guys a TARDIS cake! 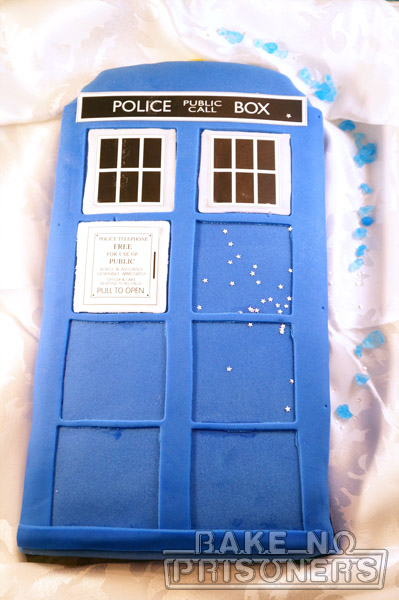 I wonder if its bigger in the inside…

This cake started out as a 9 x13 vanilla cake. I used a cardboard TARDIS pattern to cut out the shape, crumb coated it, and then covered the cake with the first layer of blue fondant. For the second layer, I cut out the squares using a square fondant cutter and carefully laid it on top. Finally, I cut out the white squares, added the yellow light on top, and glued it all together.

I dyed the fondant myself and had blue hands for a week! 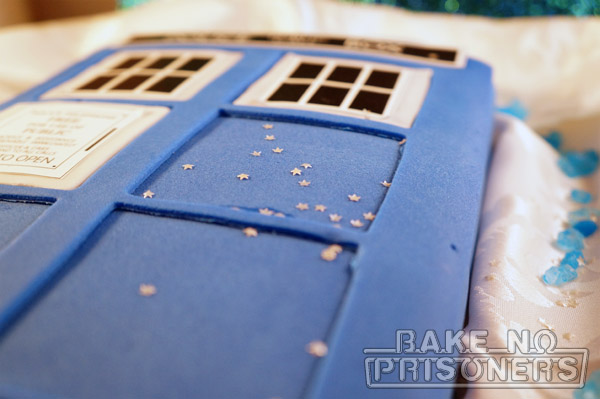 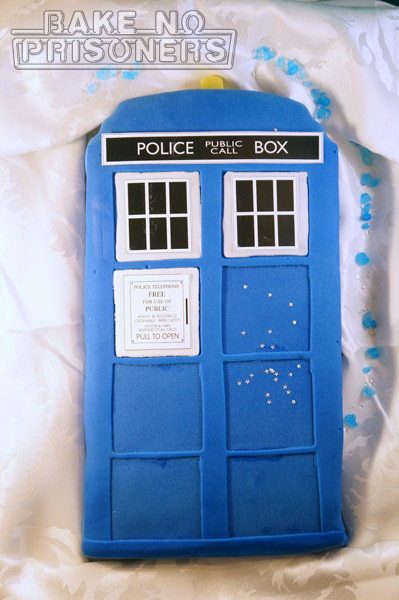 How about some Wibbly Wobbly Timey Wimey Push Pops? 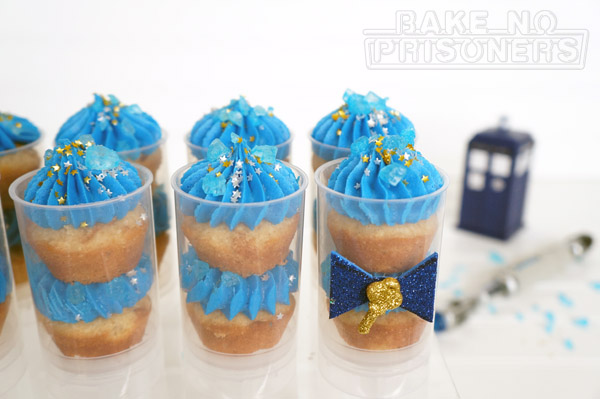 I used my mini muffin pan to make these cute little cakes and then squished them together with yummy blue buttercream! 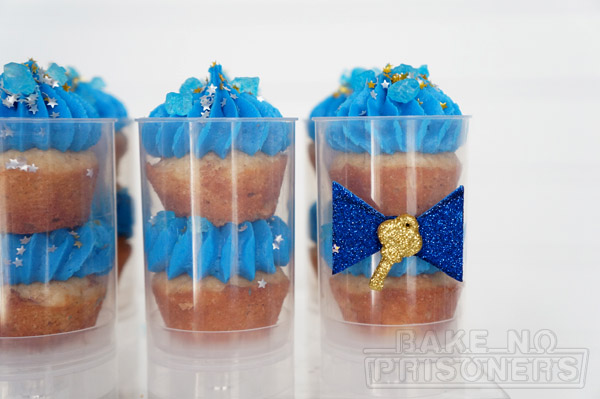 Bow ties are cool! Especially when they hold the key to the TARDIS! I am so in love with them! I found the keys at my local craft store and I cut mini bow ties out of blue sparkly foam paper. 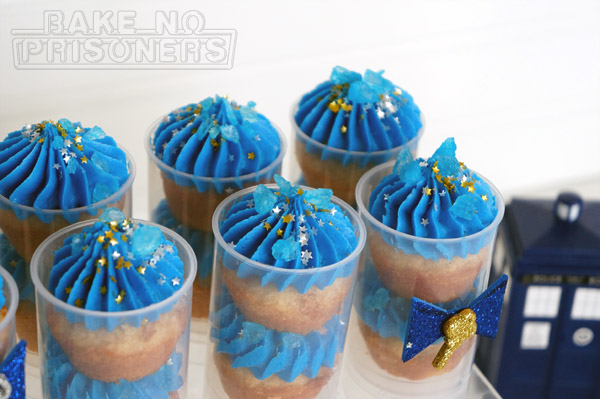 Did you notice the gold and silver stars? And the blue asteroids? Ahhh. I die. I mean…I regenerate. 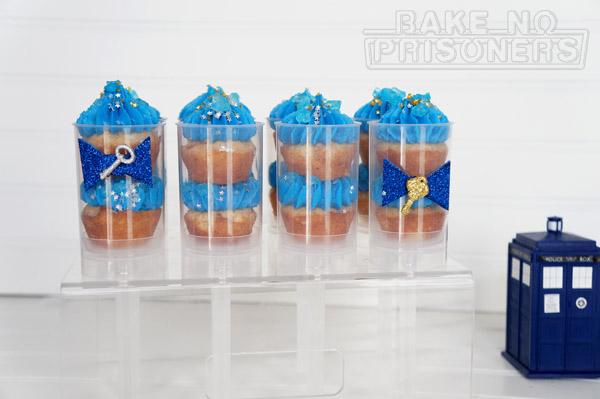 I used my basic vanilla cake recipe and added a bit of cinnamon spice, but you could choose whatever flavor you want. 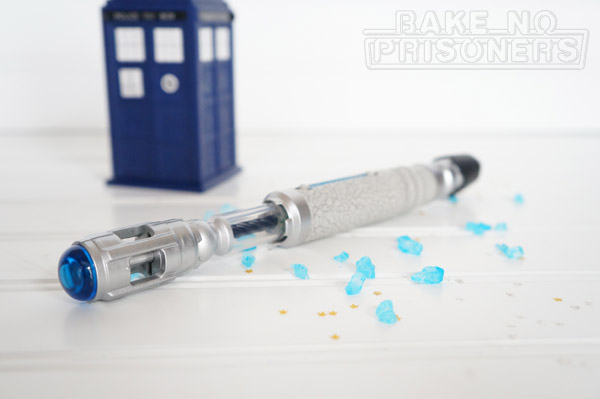 Like my Bake No Prisoners font on today’s photos? It just so happens to be a special Doctor Who Edition! Want your own Doctor Who font? Stay tuned for Part II next week to find out how to get your FREE Doctor Who font download!! You know you have to have it!! Allons-y!

I love the fact that as a teacher, I get to participate in the yearly Valentine’s Day exchange of candy and cards.  At the beginning of February, I take to the local card shops and try to find the best valentine that represents me and my favorite things. Last year it was totally Harry Potter all the way. I thought this year I might do something Hunger Games related, but lately I have been really into catching up on all of the old Doctor Who reruns. So last week I finally decided I wanted to pass out Doctor Who valentines to all the kiddos. When I couldn’t find any, I thought why not make them?!?

Here is my take on how the Doctor, Oods, Daleks, and the TARDIS would celebrate Valentine’s Day…if they could… 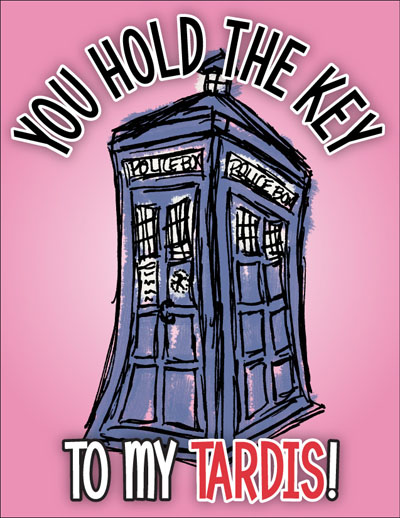 I am so excited on how my TARDIS came out. I only had to draw it once (unlike my Ood) but I think it turned out brilliant! 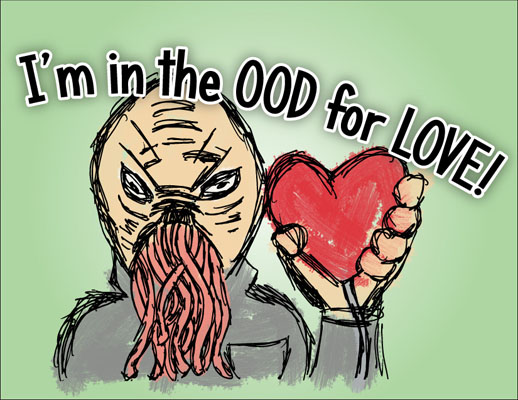 Here is my Ood…I changed his second brain into a heart for Valentine’s Day! 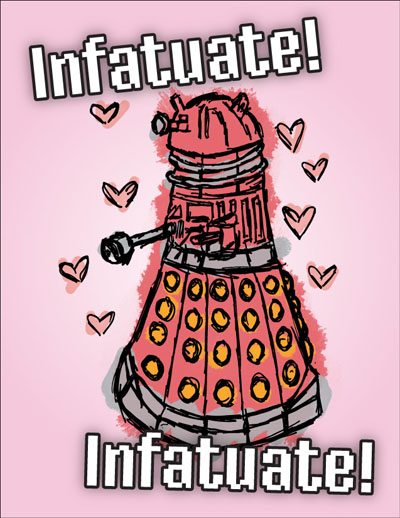 My Valentine Dalek has chosen to say INFATUATE instead of EXTERMINATE! 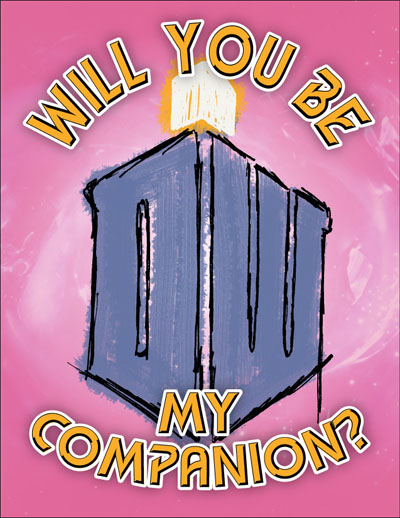 Feel free to save and print, fellow Doctor Who fans! If you plan to share or post online, please take a moment to give credit and attribution to the source of origin. To print, click on the link below and save or print “WhoValentines” on heavy bright white paper. Print at 100%, feel free to scale.

Oh, and if you’re looking to find out how to write your name (and more) in Gallifreyan, then you MUST check out Sherman’s Planet. He’s created a guide on how to translate anything into the language of the Time Lord. Tricky? Yes….but totally worth it!

I am still working on my name, but I will share it once it is completed!